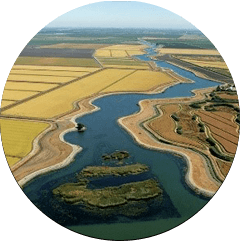 The Delta Conveyance Project (DCP) (formerly known as the California WaterFix) is a state-of-the-art, real solution to modernize, repair, and protect California’s aging water delivery system from the north. Currently, Californians receive two-thirds of their water supply from a source that begins in the Sierra Nevada Mountains and ﬂows through the state’s main water distribution system through the Sacramento-San Joaquin Delta (Delta). The Delta’s complex, maze-like waterways are supported by a series of human-made dirt levees and are highly susceptible to collapse from ﬂooding and earthquakes. Experts warn that damage to the Delta caused by a natural disaster could cut off water supplies to millions of people for weeks, months, or even years, and burden the economy with billions of dollars of debt.

There are many problems with the Delta in its current state. Since the 1800’s the Delta has been altered to support farming, transportation, commerce, and housing development which has in effect, harmed many species that pass through the Delta. The current pumping system causes reverse river ﬂows and ﬁsh are getting caught in the screens or pulled off their migration paths. Additionally, each year during heavy winter storms, thousands of acre-feet (AF) of water are lost to the ocean because of outdated infrastructure.

Championed by former Governor Edmund G. Brown, the WaterFix twin-tunnel project was selected as the best long-term plan for the Delta after nearly a decade of review, planning, and analysis with unprecedented public input. Upon taking office however, Governor Gavin Newsom halted progress on WaterFix, and unveiled his California Water Resilience Portfolio – the centerpiece of which is a downsized single-tunnel project. The newer DCP is supported by scientists, water specialists, engineers, conservationists, and other experts, and has been designed to protect water supplies by implementing the use of innovative construction techniques, improved ﬁsh screens, and a state-of-the-art seismically engineered tunnel located 150 feet underground. This design will improve reliability, and will enhance the ability to capture water and move it to water storage facilities throughout the state so we can use it when we need it.

“The DCP is the most economical way to ensure water continues to flow reliably throughout the state. Desalination, recycling, and other local projects are certainly part of the blueprint for long-term reliability. However, without completing the DCP, these options will not assure sufficient supplies.”

So what can you do?