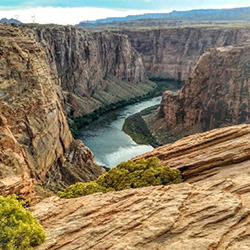 The Colorado River Aqueduct (CRA) is a 242-mile water conveyance system, built and maintained by the Metropolitan Water District of Southern California (Metropolitan). Transporting water from Lake Havasu on the California/Arizona border to Lake Mathews in Riverside County, the CRA began delivering water in 1941 and was the largest public works project in southern California during the Great Depression. The CRA took eight years to finish and provided jobs for 30,000 workers.

Today, capable of moving more than 1 billion gallons of water each day, the CRA provides water to 19 million Californians. Southern California’s growth can be largely attributed to the success of the CRA.