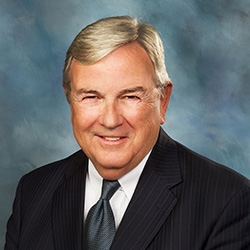 Larry D. Dick was elected to the Municipal Water District of Orange County (MWDOC) Board of Directors in November 2000 and re-elected in 2002 and 2006. He represents Division 2, which includes the Cities of Garden Grove, Orange, Tustin and Villa Park, and unincorporated North Tustin.

Director Dick has been active in the Orange County water community since the 1990’s, when he was first selected as a board member of the Serrano Water District and SWD Recreation, Inc., which governed recreation activities at Irvine Lake and provides water for Villa Park and a portion of East Orange. He is a member of the Association of California Water Agencies and the Water Advisory Committee of Orange County, which he has chaired. Director Dick has also worked to protect Orange County’s special districts, serving on the Executive Committee of the Independent Special Districts of Orange County.

Director Dick is the senior member of MWDOC’s representatives on the Metropolitan Board of Directors, where he has served since 2003. Currently he is Chairman of Metropolitan’s Agriculture and Industry Relations Committee, was elected to the Executive Committee, as well as serving as a member of the Audit and Ethics, Engineering and Operations, Legal and Claims, Real Property and Asset Management, and Water Planning and Stewardship Committees.

President and CEO of the La Salle Group in Orange, Director Dick’s business has been named Small Business of the Year by the Chamber of Commerce. An active member of his community, he has served on the executive board of the Chamber of Commerce. He is also a member of American Legion Post #0132, and has served on the Leadership Council that supports St. Joseph Hospital. Director Dick has served as a board member of the Santiago Canyon College Foundation, as well as a member of the Board of Directors of Orange County Taxpayers Association, and is a board member of the Urban Water Institute.