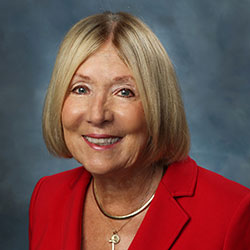 Director Ackerman presently serves as vice chair for the Santa Ana Regional Water Quality Control District. She has served on the board since 2010. She was appointed by Gov. Arnold Schwarzenegger and reappointed by Gov. Jerry Brown.

Ackerman also serves, representing the Regional Water Quality Control Board, as a member of the Santa Ana Watershed Project Authority’s One Water One Watershed board, an innovative Integrated Regional Water Management Plan.