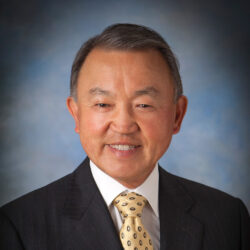 Satoru “Sat” Tamaribuchi was elected to the Municipal Water District of Orange County (MWDOC) Board of Directors in November 2014. He represents Division 5, which includes the cities of Newport Beach, Laguna Woods, portions of Irvine, Lake Forest, Laguna Hills, Aliso Viejo, and parts of Mission Viejo.

Sat’s extensive career in water began in college when he worked as a student engineer for the California Department of Water Resources. After graduation, he served three years on active duty as a Navy Civil Engineer Corps Officer then 27 years in the Navy Reserves, gaining valuable experience in Navy Public Works and Construction Management; he eventually retired as a Captain. Following discharge, Sat returned to California to work as an engineer on water quality projects in the Sacramento-San Joaquin Delta and the San Francisco Bay.

In 1973, he moved to Orange County and began work on a long-term project to control sedimentation in Upper Newport Bay – an ongoing issue identified as the top water quality problem in Southern California. In this role, he was a leader in planning and constructing over $100 million in facilities that reduced sediment load and restored the Upper Bay. He also worked with the Irvine Ranch Water District in preparing and implementing water resources master plans that outlined an extensive wastewater recycling system and identified groundwater development as a priority to augment the district’s local water supplies.

Director Tamaribuchi has a long history of contributions to the Orange County community. He was a leader in establishing the Nature Reserve of Orange County, which set aside 37,000 acres of open space to protect sensitive species and habitats. He served for 17 years as a founding board member of THINK Together, a nonprofit that provides after-school academic assistance to at-risk youth. In 2006, Director Tamaribuchi received the Coastal Protection Award from Orange County Coastkeeper. In 2012 he was given the Lifetime Achievement Award from WaterReuse California in recognition of his many contributions in the field of wastewater recycling.