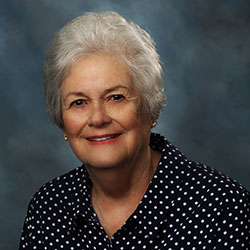 Director Finnegan was a member of the Coastal Municipal Water District Board of Directors from 1985 until its consolidation with the Municipal Water District of Orange County (MWDOC), serving twice as Vice President and President during her tenure there. In November 2000, she was elected to represent Division 4 on the newly consolidated MWDOC board, where she represents Huntington Beach, Seal Beach, and portions of Costa Mesa, Irvine and Newport Beach.

Director Finnegan was named Assemblyman Ken Maddox’s Woman of the Year of the 68th District in 2003 and Costa Mesa Woman of the Year in 1980. She served on the Orange County Grand Jury 1980-81. She was also employed by the Mesa Water District for more than 21 years as the district’s office manager and auditor.

A 54-year resident of Orange County, Finnegan resides in Costa Mesa with her husband, Robert. They are the parents of two children and the grandparents of four. Her interest in water also extends to an interest in Japanese Koi fish – she is past president of the Southern California Koi Club, past president and founder of the Orange County chapter of the Zen Nippon Arinkai organization from Japan. She was also President three times of the Associated Koi Clubs of America (AKCA).