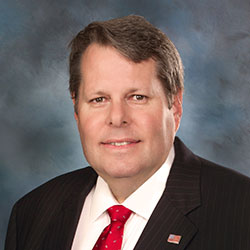 Barbre represents Division I, which includes the cities of Brea, Buena Park, La Habra, La Palma, Placentia and Yorba Linda. Prior to his election to MWDOC, Barbre was an elected member of the Board of Directors of the Yorba Linda Water District from 1998 to 2000.

His primary goal in the water community is to ensure there is an adequate water supply for all of the needs in Orange County. He is leading the federal lobbying efforts to build a desalination plant in Dana Point and has been active in pursuing the approval and development of de-sal plants in Huntington Beach and throughout southern California. He has utilized his expertise lobbying on behalf of the MWDOC to help secure millions of dollars in local, state and federal funds to build these projects, and other water use efficiency projects, in order to increase water reliability for Orange County and all of southern California.

In 2009, Barbre was appointed to the 38 member Board of Directors of the Metropolitan Water District of Southern California (MWD) which imports water from northern California via the State Water Project and from the Colorado River via the MWD owned/operated Colorado River Aqueduct. MWD delivers water to approximately 20 million residents and serves the largest population of any water district worldwide. He currently serves as a member of the Finance & Insurance Committee, Engineering & Operations Committee, the Communications & Legislation Committee and the Audit & Ethics Committee.

He has been a champion of pension reform and led the efforts at both MWD and MWDOC to establish an irrevocable Other Post-Employment Benefits (OPEB) trust fund to pay down the benefits awarded in years past but were not funded. What this means is future ratepayers will not have to pay for benefits awarded but not funded years earlier. He also championed the efforts for absolute transparency in providing web access for all compensation and expense records for Directors at MWDOC.

Barbre is the Assistant General Manager for the Yorba Linda Water District (YLWD), the premier water and sewer agency in North Orange County.  Prior to his service at YLWD, he was principal of Barbre & Associates, a public affairs company specializing in lobbying, campaigns strategies, media and public relations. He has represented clients at the local, state and federal levels and has successfully worked and directed campaigns from local water board to United States Senate races, and everything in between. He has successfully lobbied for and obtained multi-million dollar contracts for numerous clients.

For over 30 years in Orange County public affairs, Barbre has been extensively quoted in most major newspapers in California including the Los Angeles Times and the Orange County Register. He has appeared in such prominent national publications as the Washington Post, the New York Times, Bloomberg, the Wall Street Journal, The Bond Buyer and the Dow Jones News Wire, and has also appeared on countless local and national public policy radio and television programs.

A diehard fan of the Boston Red Sox, Barbre can often be found travelling around “Red Sox Nation” to watch them play. He is a graduate of George Fox University in Newberg, Oregon, and being a native of north Orange County, he attended and graduated from Glenknoll Elementary School, Bernardo Yorba Junior High School and Esperanza High School. He has been a resident of Yorba Linda since 1969 where he currently resides with his wife, Jean. They have two grown daughters, Kimberly and Kathryn, two grandsons and one granddaughter – all of whom are already diehard Red Sox fans!